A BIT ABOUT SETTING

Setting, like in my thrillers The Coin, can be a powerful tool. Since I was living in an area where the landscape could create a serious conflict to the already threatened main characters, I used it to enhance the car chase scene in the beginning of the novel and throughout another climactic scene. The photo will give you an idea of the image my words were trying to paint for my readers and the danger it generated. 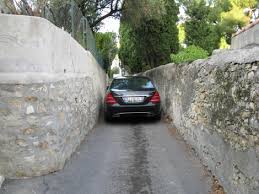 Excerpt from The Coin:
They continued at a reckless speed down the narrow road where more private driveways branched out like river tributaries, some of them perilously concealed. Richard knew the hazards of not slowing down on this type of road, but he dared not. Gabriela’s quick thinking had given them an advantage of two, maybe three minutes at most. Richard knew the stalking would continue, and he needed to widen the gap quickly. Their survival depended on his maintaining a healthy distance.
The winding road began a steep descent and was in some places so narrow, the car seemed to scrape the rough walls. They gathered momentum. Richard could sense Gabriela involuntarily tightening her arms and pressing her legs down hard on imaginary brakes. He could feel her rising panic and her attempt at controlling it. Even though he wanted to, he could not afford to slow down or be comforting. He expected the familiar black hulk to loom behind them, or worse still, try to intercept them further ahead where the main road merged with this one.
They came to a horseshoe turn and suddenly the Mercedes came into view behind them. Richard accelerated, knowing the battering ram would begin soon.
Gabriela gulped. “He’s after us again, isn’t he?”
The car jerked forward as her answer.
Next week, I’ll post another use for setting from my detective novel, Hanging Softly in the Night, set in New York City as another example of setting as as enhancement to plot.