Haven’t done this in a while, and can’t wait! Fellow author and friend, Laurie Olerich, has her new Demons After Dark Series book 3 out!!! OMG! CHECK IT OUT!! It is fantastic! So, without further ado, a Q&A with Laurie Olerich: 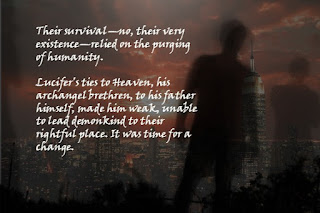 ME: Ok. What is the title of your novel:

Koivu, Book Three of the Demons After Dark series. It is a Paranormal romance to be released October 12, 2017.

ME: Tell us more about the series?

It’s hot paranormal romance featuring unlikely alpha heroes who will make you laugh, cry, and swoon. Known as Trinity demons, this band of brothers was stripped of their powers and violently exiled from Hell. Forced to live as humans, they’re left with no power and no weapons while a secret society quietly plots Lucifer’s demise. For these big, bad demons, adjusting to life as a human is, well, harder than Hell!

ME: What will readers see in the blurb (in other words, show me more!):


Former Hell’s Fury champion, Koivu, is desperate to return to Hell to reclaim his title and stolen life. As an extreme athlete, he had fame, glory, and more pleasure than he probably deserved. He was a freakin’ rock star! Being exiled in a broken human body is his worst nightmare. Stripped of his powers and unable to fight, he’s consumed by frustration, counting the seconds until he can go home. His future looks bleak until he meets a sexy, soft-hearted physical therapist who heals much more than his shoulder.
Physical therapist Micki Glass knows something about damaged people. She’s been struggling to get over her ex for three long years when this crazy man crashes into her life. He’s crude and intense but irresistibly charming. With his feral eyes and sexy smile, Koivu takes her on a sensual joyride that makes her feel like a woman again. As their affair heats up, she craves him like oxygen until she discovers what he really is. With more than her heart on the line, can she accept his past and love him for who he is now?

The day of reckoning is looming closer and the sacrifices have begun. Can Koivu stop the murders, find the rest of the Trinity, and convince the woman he loves to give him another chance?

ME: A little peek into the novel!
EXCERPT:

The Brooklyn Bridge was nearly deserted at 0400 hours on a Sunday morning. Only crazy people would be out on a cold, dark day. Koivu shrugged more deeply into his jacket and turned his face away from the odor of dried blood. The East River gleamed dully, barely reflecting the handful of lights visible in nearby buildings. A lone ghostly boat pushed a string of barges beneath him. He automatically calculated the distance from the sidewalk to the barge below. Once upon a time, in his demon form, he would’ve jumped for the fun of it.
Now? His fragile human body wouldn’t survive without broken bones or worse. Thanks to Lucifer, his shoulder was perfect again. He was unbelievably healthy now. His physical body was practically glowing with stamina. True to his word, the mighty archangel gave them precisely five minutes, and performed more than a few miracles in that time. Sighing with gratitude, he pulled his thoughts back to the tat on his hand. Lucifer’s touch had done something to it.
Close your eyes. This is going to hurt like a bitch.

Truer words had never been spoken. The devil’s flame burned hotter than Hell itself. The hellfire now filled more than the magical ink shaped into a trinity knot. Had Lucifer done it on purpose? Had he known what his touch would do to his exiled demons? Or, was it just a happy side effect of breaking the tracking connection? Impetuous archangels! Did any of them think before they acted? He rubbed at the ink again and smiled grimly at the faint red glimmer that flashed with his sudden anger. The glimmer was a problem. So were his eyes. Damn it. 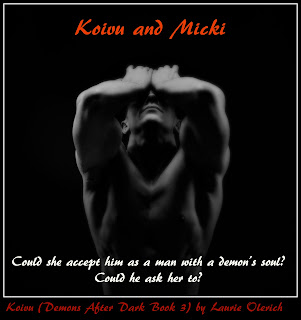 ME: OOOOOOO…. I LIKE! Now let’s get a peek at Mikki Glass:
EXCERPT:

“Dr. Glass, your next patient is waiting.” Her receptionist, Shantel, paused before adding shyly, “Fair warning, he’s in a mood. Do you want me to give him to a tech to start him on warm ups?”
She pinched the bridge of her nose against the beginnings of a vicious headache and sighed into the phone. Yay. God forbid he be easy for a change. Her receptionist didn’t get paid enough to deal with Mr. Big and Grouchy. Dealing with him was her job. “My day can’t get any worse. I’ll be right out, Shantel.”
After popping a couple of aspirin, she skimmed her patient’s file to review their treatment plan. Normally she loved being a physical therapist. She was fascinated with the mechanics of the human body and truly wanted to make people feel better. Since she was squeamish about bodily fluids, nursing and doctoring were out. As a PT, she could work wonders with patients without the blood and urine. It was the perfect job. Usually.

Mr. Big and Grouchy was more than simply a difficult patient. There was something in the way he looked at her that made her uncomfortable. To most patients, she was a means to an end; a tool, really. Most people focused on her instructions and paid no attention to her as a person. She could’ve been a robot as long as she got results. But this one was different. She wasn’t afraid of him—that wasn’t it—she was unbalanced with him. It was the intensity of his stare that bothered her. Sometimes it was almost like a wolf’s predatory assessment. Cool, intelligent . . . inhuman. His icy jade irises seemed to see beyond her professional mask. He watched her, studying her as she worked with him. Sometimes his mouth lifted into a knowing smirk that made her wonder just what, exactly, he saw when he gazed into her face. Did he see her secrets? Did he see her shame? It was disconcerting, and she wasn’t in the mood for it today.

ME: OMG! After those excerpts, I’m running to get this novel!! Here is the cover (Yum!) and the buy links: 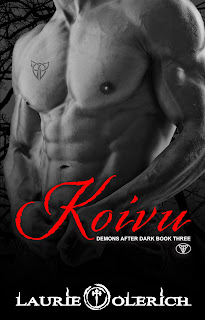 ME: Where can readers touch base with you and comment, not only on that yummy cover, but also about your characters?